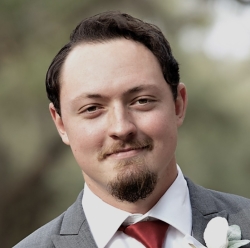 William Harrison
William is a senior at The Baptist College of Florida, majoring in Missions. He and his wife, Callie, are passionate about coordinating missions for unreached people groups. He attends First Baptist Chipley while enrolled at BCF, and is a member of Immanuel Baptist in Tallahassee, Florida. He enjoys spending time with his dog, Willie, and writing biblical poetry.

No matter who you are in life, whether a Christian or not.
There’s always times of difficulty, for some a few and some a lot.
There’s death, abuse, and things that are not fair
But why do we assume that God above looks without care?

We want someone to blame for the issues in our lives.
We tend to blame unjustly cutting deeper with our knives.
Perhaps we blame our God, the killer, or the abuser
Though we tend to think it wrongly when being the accuser.

Many men who once knew God and sought him night and day
Have faced a pain that they can’t solve and turned their hearts away.
Not only did they turn away they also tossed a blame.
There is no God of good and love is what they would proclaim.

Though why would you not condemn the sinful man you see.
He did the wrong, rebelled against God, and hurts others constantly.
Should we judge this man of sin, this heartless sinful seducer
This man, once an innocent child, or his father an abuser.

If we want to accuse who we see, as the wretch and sinful one.
We shall also accuse their abusers and the harm that they have done.
Sinners produce sinners, of that we are aware.
We accuse only one, not the other and think its fair.

Is the one we are to accuse, a man or something more?
Where did evil com from that fuels the sinful core?
Paul says flesh is not the war that we are to be facing.
Evil comes from other powers that we are all embracing.

Satan is the one in whom we think we all ignore.
Yet we blamed God and all the others for the pain that we had wore.
If we accused the one who is the cause of all the mess.
All will be found guilty along with Satan nonetheless.

No matter who you are in life, whether a Christian or not.
We like to blame incorrectly, a little or a lot.
There will be death, abuse, and things that are not fair.
But it’s always God who loves you most, it’s God who’ll always care.

What image of the professing sun do we see?
Can an image trap ones who seek cluelessly?
And why do our hearts tend to disagree?
with the true image of the sun we can see?

Will you mistake a wolf for a sheep?
And strip a sheep of it’s wool?
Beware these persuasive sirens;
that spread like Propagules.
(Matthew 7:15)

Some wolves will make themselves easily known;
Though others, wear clothing of Lions they’ve sown.
Just like Satan who’s as dark as the night.
Has stitched himself up as an angel of light.
(2 Corinthians 11:13-15)

Dwelling under mistaken suns, whom promise to arise.
Lack small thing’s the true sun has but some don’t recognize.
These suns know they can’t be lit and fall down from the skies.
Along with all who claimed these suns, they fall to their demise.
(Matthew 15:13-14)

When the time has come, to see the true sun
You will have known, if you’re under the right one
Every man, who dwelled in its light
Always knew, that this sun was right.

The men who noticed, the wolf in disguise
Knew not to follow, for they had a guide
The true sun had showed them, the good from the bad.
So they blocked out the evils, all other suns had.

How is it so, that it happened to you?
To the ones who were tempted and denied what is true.
For someone who’s saved it seems like insanity.
But it’s easy for ones who praise their humanity.

Learn more about The Baptist College of Florida.

A Manifesto for Male and Female
Podcast S2, Ep. 14 – The Beginning of the Sin (Micah 1:13)
Why Do We Doubt?
Acceptable to God, Approved of Men