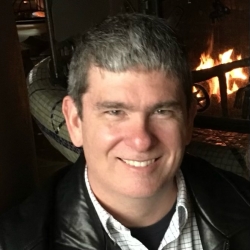 Neil Whitwam, MS, MA
Neil is an orthopedic nurse practitioner with over 30 years’ experience. He is also an avid student of God’s Word and active in his local church. As a writer he seeks to both inspire and entertain readers through fun and uplifting stories that point readers to Jesus Christ. Neil holds a Master of Science in Nursing from The University of Central Florida and Master of Arts in Christian Ministry from Liberty University. He is married to Brenda, and they have two adult daughters.

Mawthiw the Mouse was rather pleased with himself as he studied his diploma.

Having just graduated near the top of his class in the prestigious Rodent Preparation Academy (RPA), he felt more than prepared to face the world.

He had achieved a high level of skill at scurrying about, rapid face-washing movements, and table leg climbing.

He had, of course, learned about the bad things as well: cats, owls, mouse traps, and such.

Mawthiw, however, had never actually seen any of these things, and he suspected that they were largely fallacies concocted to scare little mice into minding their manners and obeying their elders.

There was a particular issue that RPA leadership had guardedly alluded to but had never transparently addressed.“What was this substance of vice, this nefarious and illicit stuff that so many secretly craved, but that was strictly off limits to the young mice at RPA? Cheese.”

Unsurprisingly, this issue had immediately captured Mawthiw’s interest, an interest that lately had been evolving into an obsession.

He was not alone. Adolescent mice would discuss the issue in whispers. Some of the more daring students had pictures secreted away in places unlikely to be discovered.

It was rumored that several graduating classes ago a small supply of a particular substance had been discovered at the school, that several students were discretely expelled, and that the entire issue had thus been hushed up.

What was this substance of vice, this nefarious and illicit stuff that so many secretly craved, but that was strictly off limits to the young mice at RPA?

Mawthiw had heard all the stories about cheese. He was keenly aware of its existence, and even believed he had smelled it once or twice, but certainly he had never seen nor tasted it.

Mom and Dad had sat him down and had “the cheese talk” with him.

They told him that it was NOT good for young mice to eat cheese, or to hang around with other mice who did.

For that matter, it was not good for mice of any age to eat cheese. There were just too many potential problems and pitfalls for cheese eaters.

Cheese eating was not advisable for anyone, but it was absolutely forbidden to young mice.

The truth of the matter was, however, that Mawthiw knew that Mom and Dad had messed around with cheese when they were his age.

Arguably, theirs was a less informed and more innocent generation, but obviously cheese had not killed them.

As a matter of fact, he strongly suspected that Dad had smelled a bit like cheese himself just a couple of weeks ago.

He felt that all of this anti-cheese rhetoric was a bit hypocritical coming from his parents.“Cheese eating was not advisable for anyone, but it was absolutely forbidden to young mice.”

Then, of course, there was The Prophet, that eccentric old mouse with his twisted nose, single eye, broken front tooth and deformed whiskers on the left side of his snout.

He had a shortened tail and a twisted right hind leg. He would lurch up to the young mice and confront them, in his raspy voice, regarding the evils of cheese.

“Cheese is evil. Stay away from it. Don’t look at it. Don’t even go near it!”

He was a pretty weird mouse, The Prophet. It was common knowledge that he had nearly died in his youth from a violent cheese exposure.

One day Mawthiw had asked Dad point blank about the cheese issue. Dad sat down next to him and explained that, as far as he understood the issue, cheese in and of itself was not necessarily evil, but that it was an instrument of the destroyer.

Dad explained that the best way to guard against the dangers of cheese was, indeed, like the prophet said, to avoid it completely.

To Mawthiw’s embarrassment, Dad then broke down and wept, confessing to Mawthiw that he had some struggles with cheese himself, and that he certainly hoped that his son would never even try the first crumb.

Now here he was, a grown-up mouse, newly graduated from RPA and ready to be out on his own. Exciting. A little scary but exhilarating.

Rodney, one of his friends, came up and greeted him.

“Hey Mawthiw, you wanna go out tonight and have some fun?”

He was not sure that was a good idea. Rodney had always been a troublemaker.

“What you have in mind, Rodney?”

Rodney looked around. No one else was in earshot. He grinned slyly and winked.“I do not care. I am grown-up now and I will do what I want!””

Mawthiw was caught off-guard. “Oh, really?” he managed to say in a raspy voice.

“Yes, really.” Rodney’s beady eyes glowed and his nose twitched, “Oh, did I say cheese? What I meant was – a cheesy feast!”

Immediately Mawthiw’s mind flooded with warnings from Mom and Dad, from The Prophet, and from his teachers at RPA.

He pushed them out of his mind. “No. I do not care. I am grown-up now and I will do what I want!”

His mouth was dry. He could hardly speak. He heard himself croak, “I’m with you, dude.”

That night, he followed Rodney as the pair snuck quietly out of the mouse-hole and into the big world.“He finally saw it in all of its amazing wonder and glory. Elevated up on a shiny pedestal, it was everything he had ever dreamed of – a huge, gorgeous, aromatic, totally enchanting wedge of cheese!”

They had not gone far when Mawthiw caught the waft of a curiously enticing aroma.

The new smell was delicious and compelling. Following his nose, he crept toward its source as it grew in intensity.

The odor became increasingly full, and pungent, and intoxicating. Abandoning Rodney, he scurried across the floor toward the source of the smell, and then froze in amazement.

He finally saw it in all of its amazing wonder and glory. Elevated up on a shiny pedestal, it was everything he had ever dreamed of – a huge, gorgeous, aromatic, totally enchanting wedge of cheese!

Scurrying up to this fantasy-come-true, Mawthiw felt like he was in a dream, experiencing an enchanting vision as he crossed this existential threshold.

How could he possibly have lived his entire life up to now without this?

He goggled at his prize. He froze briefly, inhaling the maddening bouquet, and then, opening his mouth, he plunged his teeth into the creamy, soft, deliciousness.

The flavor and smell were indescribable. He quivered in ecstasy as his tastebuds cascaded a tremendous surge of dopamine into his amygdala.

His nose and tail tingled. This was fabulous!

He took a second, bolder, bigger bite. Instantly, out of nowhere he felt an irresistible force strike him in the back of the neck.

He suddenly realized that he could not feel his paws. Then everything went dark.

Willie stared in morbid fascination as Ben picked up the grisly object.

Willie peered at the object in Ben’s hand. The bar of the mouse trap transfixed the mouse to the wooden base by its neck, which was clearly broken. The little body hung limp.

“Look, it still has a big bite of cheese in its mouth,” Ben pointed out.

“These poor little morons – cheese fools them every time.”

The young men sauntered outside. They crossed the yard, and then stopped as Ben extricated the dead mouse from the trap and flung the little creature into a drainage ditch.

As they walked back into the shed, he carefully inspected the trap.

“Still enough cheese left on the trigger to bait the next mouse stupid enough to want a tasty snack,” he declared.

Cautiously, he reset the trap, and placing it down on the floor, said in a deep and melodramatic voice, “Next victim, please!”“Some of the other guys are cooking up a little party for graduation.”

Willie found this a disturbing. He understood the need to eliminate vermin, but he found no pleasure in the deed. Watching the process made him a little squeamish.

Ben’s voice then lowered conspiratorially, “Hey Will, I wanna let you in on something.”

“Some of the other guys are cooking up a little party for graduation.”

Willie pondered this. Not the three most wholesome characters in their high school’s graduating class.“Immediately Willie’s mind flooded with warnings…No. I do not care. I am grown-up now and I will do what I want!”

“What kind of a party?” he queried.

Ben grinned, “Leroy’s uncle Gus offered to buy us some beer. It’s gonna be awesome. Tony usually has a bag of weed, and there are gonna be some girls there!”

Willie was caught off-guard. “Oh, really?” he managed to say in a raspy voice.

Immediately Willie’s mind flooded with warnings from Mom and Dad, from Pastor, from his youth group leaders.

He pushed them out of his mind. “No. I do not care. I am grown-up now and I will do what I want!”

His mouth was dry. He could hardly speak. He heard himself croak, “I’m with you, dude.”

Nearby, two demons observed the pair of young men from their hidden vantage point.

One laughed to the other, “These poor little morons – sex, booze, and drugs – fools them every time!”

“At last the Turkish Delight was all finished and Edmund was looking very hard at the empty box and wishing that she would ask him whether he would like some more. Probably the Queen knew quite well what he was thinking; for she knew, though Edmund did not, that this was enchanted Turkish Delight and that anyone who had once tasted it would want more and more of it, and would even, if they were allowed, go on eating it till they killed themselves.” –C.S. Lewis, The Lion, the Witch, and the Wardrobe

31) Look not thou upon the wine when it is red, when it giveth his colour in the cup, when it moveth itself aright.

10) And, behold, there met him a woman with the attire of an harlot, and subtil of heart.Proverbs 7:10 (KJV)

13) So she caught him, and kissed him, and with an impudent face said unto him.Proverbs 7:13 (KJV)

22) He goeth after her straightway, as an ox goeth to the slaughter, or as a fool to the correction of the stocks;

23) Till a dart strike through his liver; as a bird hasteth to the snare, and knoweth not that it is for his life.Proverbs 7:22-23 (KJV)

27) Can a man take fire in his bosom, and his clothes not be burned?

1) My son, forget not my law; but let thine heart keep my commandments: