In this episode of The Greater Heritage Podcast we’re going to learn about the background and historical significance of the Geneva Bible, the most important English Bible.

Recently, while venturing though the aisles of a thrift store in rural Florida, I came across a special treasure.

I discovered a like new copy of the 1599 Geneva Bible published by Tolle Lege Press.

It was sitting on an unassuming free Bible table near the store’s entrance and I couldn’t believe it.“…the Geneva Bible was the first Bible read by common people in English.”

Now, I had always been somewhat familiar with the Geneva Bible, however I had never come across a copy before, let alone one for free.

Suffice to say, I’m overwhelmingly grateful that I did.

For those unfamiliar, the Geneva Bible was the first Bible read by common people in English.

It was first published in 1560, predating the King James Version (KJV) of the Bible by about half a century.

The Geneva Bible quite literally changed the world.

Among the many people who used it were John Bunyan, Oliver Cromwell and his soldiers, John Knox, John Milton, Pocahontas, the Puritans, the Pilgrims and William Shakespeare.

The Creation of the Geneva Bible

The Geneva Bible was born out of the throes of persecution.

In 1553 Mary Tudor took the throne in England. Known to history as “Bloody Mary” she set out to return England to Roman Catholicism.

As such, she made every effort to stamp out any evidence of the Reformation in England.

Sadly, she had over 300 people martyred. Yet in light of the tragedies that had befallen England at that time, God remained sovereign. 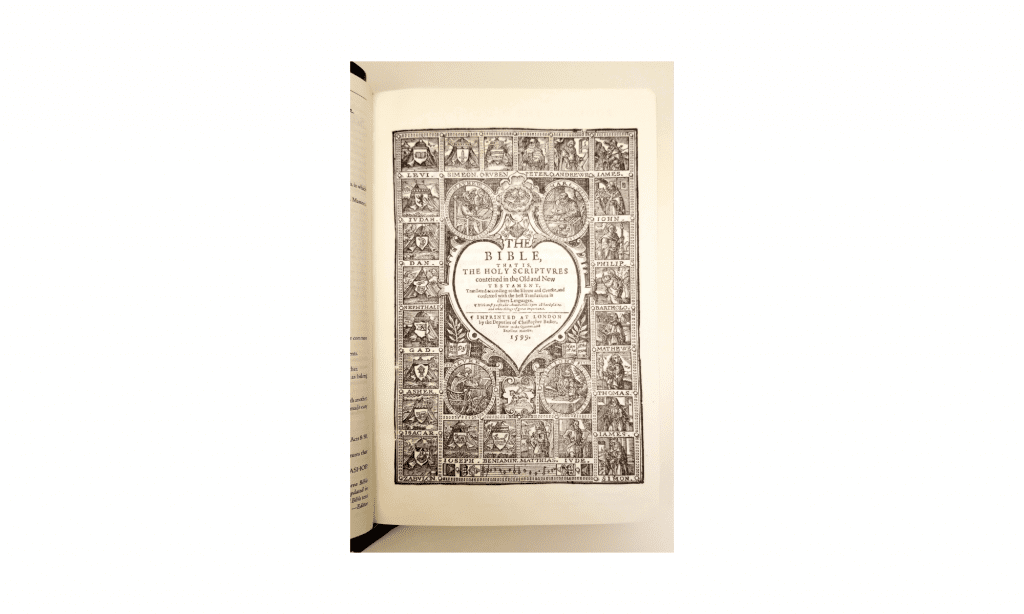 While Mary meant evil against the Reformers, God meant it for good.

Nearly 800 English scholars fled England for mainland Europe to escape Mary’s regime. This event is known in history as the Marian Exile.

“Yet in light of the tragedies that had befallen England at that time, God remained sovereign.”The exile ushered in an era of Elizabethan Puritanism that would lead to the formation of the Geneva Bible.

Many of the exiles found refuge in Geneva, Switzerland, home to John Calvin and also the town from which the Bible derived its name

It was here where a group of theologians and scholars set out to create a Bible for the common man.

It would also be a Bible not based on the inadequate Latin Vulgate translation used by the Roman Catholic Church.

In just two years, the Geneva Bible was born.

It was the first Bible ever produced by a committee, however this was not the only “first” it would be known for.

The Bible of “Firsts”

The Geneva Bible is notable for its many “firsts.”

It was the first English Bible to be fully translated from the original languages. Strangely enough, the fall of Constantinople in 1453 helped in this regard.

The fall opened the world up to new ancient Biblical texts that had been previously unknown by many outside the Byzantine Empire.

This, coupled with the Renaissance’s deep desire to return to the ideas of antiquity created an atmosphere ripe for new and better Biblical scholarship. 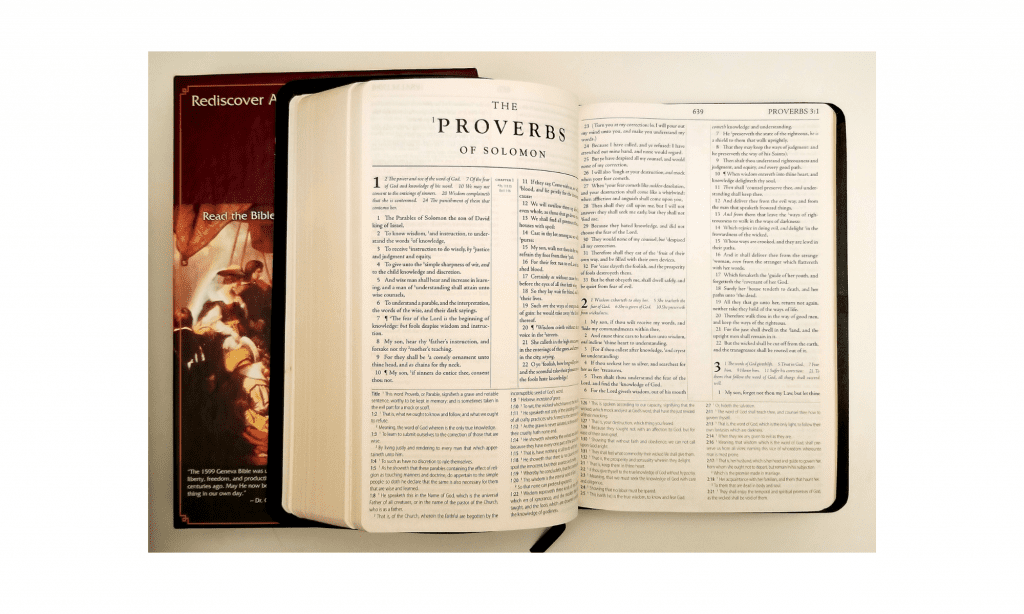 It was also the first to be printed in Roman type, and in quarto size.

As such, it could be easily read and transported. Gone were the days of large and unwieldy tomes.

This was incredibly helpful to missions work and to the spread of God’s Word.

“Overall, the many firsts of the Geneva Bible point to an emphasis on clarity, accuracy and accessibility.”The Geneva Bible was also the first Bible to have chapter demarcations and verse numbers within chapters.

We take them for granted today, but back then these were incredibly novel and important developments.

Because of its organized structure, the Geneva Bible fostered scripture memorization and cultivated familiarly of the systematic structure of the Bible.

Overall, the many firsts of the Geneva Bible point to an emphasis on clarity, accuracy and accessibility.

The Tolle Lege Press edition was first printed in 2006. I found a version from 2014.

The Tolle Lege leather version appears to be currently out of print. However, many retailers still carry the Geneva Bible online.

The Geneva Bible was first published in 1560. Yet there were many versions of it that would come out in the decades after its initial release. 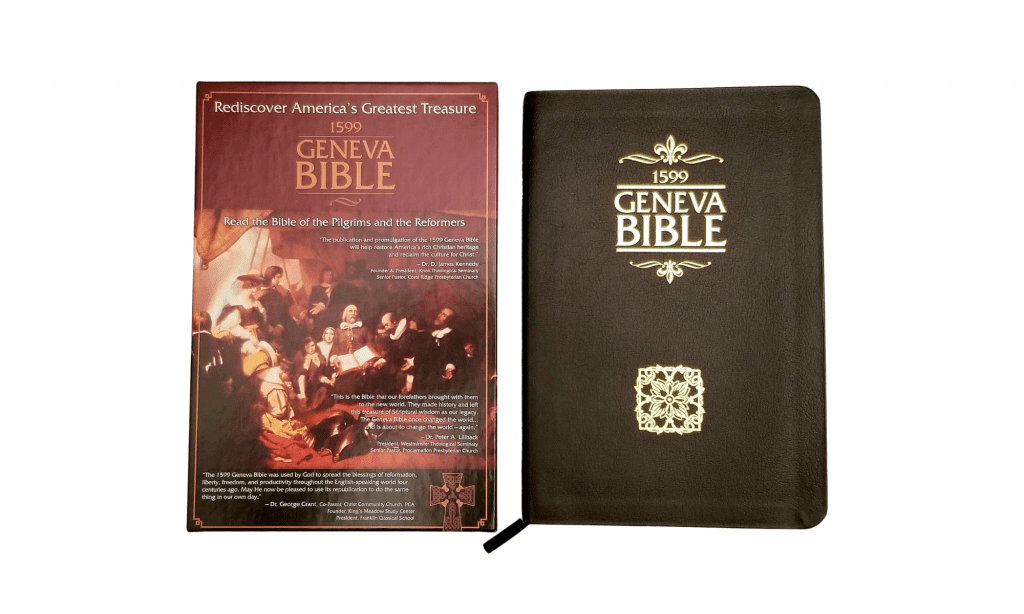 The Tolle Lege editors chose to reprint the 1599 version of the Geneva Bible as it is the most definitive version.

In the process they ensured that the Bible remained true to its source.

Besides some very minor grammatical changes, the Tolle Lege version is pretty much an exact reprint of the Geneva Bible as it appeared in 1599.

Overall, they did an exceptional job.

I read the King James Version (KJV) most often, and the Geneva Bible is quite comparable. They were in fact, only decades apart.

“I really enjoy reading the 1599 Geneva Bible. Its rendering of the English language is steeped in eloquence.”As a matter of fact, the Geneva Bible was influential in bringing about the King James Version.

King James I of England did not adhere to a Calvinistic outlook. As a result the Geneva Bible never quite caught on with him or with the conservative clergymen in his purview.

He wanted to create a Bible without John Calvin’s notes as well. While this was not the only factor that lead to the King James printing, it did play a role.

Nevertheless, when the King James Bible was officially printed in 1611, the world was treated to what is still in my opinion the de facto Bible of all time.

Still, despite their many similarities, I actually find the Geneva Bible a bit more pleasant to read than the King James Version which says a lot.

For instance, even secular scholars consider the King James Bible to be the most beautifully written book of all time.

Even still, I really enjoy reading the 1599 Geneva Bible. Its rendering of the English language is steeped in eloquence.

Ultimately, I have no hesitancy in recommending the Geneva Bible to anyone. Its literal, sound, and beautifully written.

There are a couple unique and interesting asides that pertain to the 1599 Geneva Bible.

While I don’t personally have a problem with that, it is important to approach the Geneva Bible as something written in its time.“…back in the 1700s it was illegal for any English translation of the Bible to be printed in the Colonies.”

Some of its anti-Roman Catholic rhetoric points to issues that were quite specific to its era. While these are interesting in a historical sense, some of it needs to be taken with a grain of salt.

A second unique feature is that the 1599 Geneva Bible contains names inside of those who helped bring the new version to print.

This was an homage to John Brown of Haddington’s Self-Interpreting Bible.

Contributions from donors through a subscription service made the 1791 printing of that Bible possible. 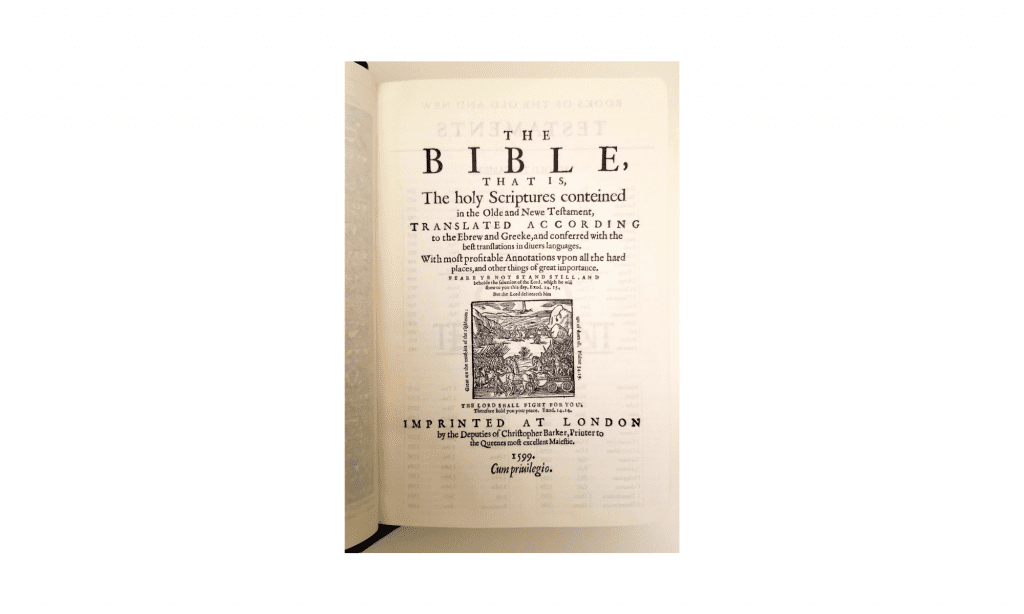 Just like the re-print of the 1599 Geneva Bible, the Self-Interpreting Bible contained the names of those who supported its publication.

Named inside were such notable men as Alexander Hamilton, John Jay, Henry Knox and George Washington.

Numerous others also supported its publication.

The reason for this was because back in the 1700s it was illegal for any English translation of the Bible to be printed in the Colonies.

Of course, it was not illegal if the King of England approved that is. However, printing had to be done in England otherwise.

This underscores just how precious Bibles were to men and women back then, and just how restrained our American forefathers’ freedoms really were.

For example, the Mayflower Compact, which created the first constitutional government in the western hemisphere, was based on the Geneva Bible.

The English Renaissance of the 15th through 17th centuries found its roots in the Geneva Bible as well.

Its most important legacy however, is that it was the first Bible in common English to be placed into the hands of all people.

“The Geneva Bible was truly instrumental in bringing Christian civilization to the world.”

Because of the Geneva Bible, every level of society had access to and became saturated with God’s Word.

Through its publication, people had Biblical concepts of Christian government and civilization at their fingertips.

It set the stage for Godly principles to become integral components of society. 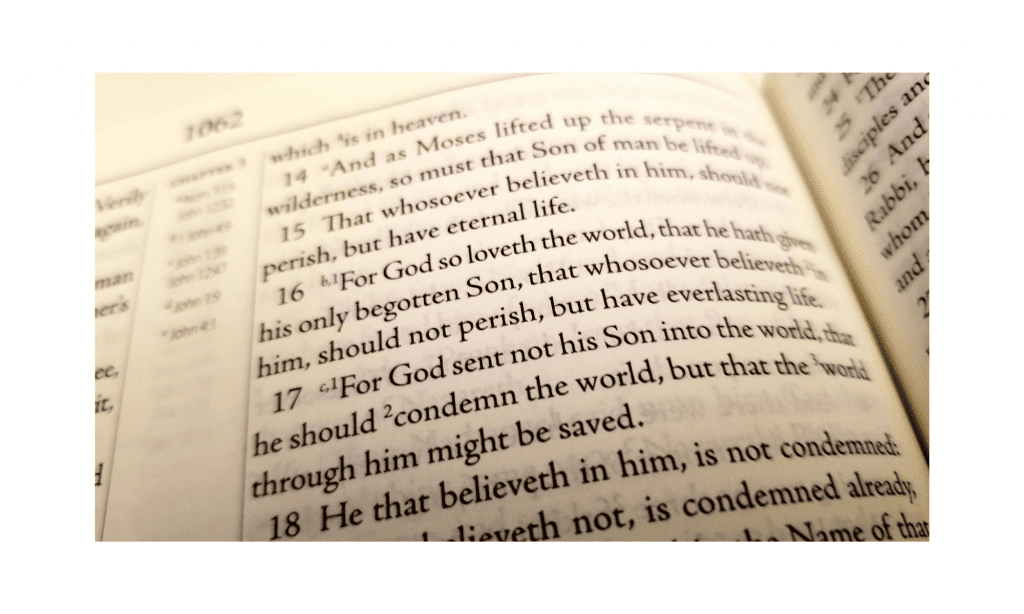 Free enterprise, protection for women and children, an appreciation for education, self-government, equality, self-sufficiency and self-reliance were all principles that came directly from God’s Word to the world through the Geneva Bible.

Conclusion – Do Not Forget

Just as the Reformation had done it brought common people out of the intellectual darkness of the Middle Ages to a new era.

“While is is an unpopular stance to take in today’s world, the only true and good society is the one with Jesus at the center.”It brought mankind from the depths of slavish feudalism to the grand mountaintops of Christian civilization.

In fact, the very idea of America found its roots in the Geneva Bible.

We must never forget that God’s Word changes not only individual lives, but entire societies and countries.

While it is an unpopular stance to take in today’s world, the only true and good society is the one with Jesus at the center.

Even today, God continues to use His Word to redeem people back to Himself until He fully restores the world at His return.

May we never lose site of the preciousness and power of God’s Word, and may we never take its possession in our hands for granted.

Intro and outro music provided by Five Minute Plan. Be sure to visit their site today!

Podcast S3, Ep. 9 – Searching Our Hearts in Difficult Times by John Owen
Podcast S2, Ep7 – Spiritual Depression by Martyn Lloyd-Jones
In Need of Each Other
Ask Augustine: When Is Reformation Day and What Is Its Significance?