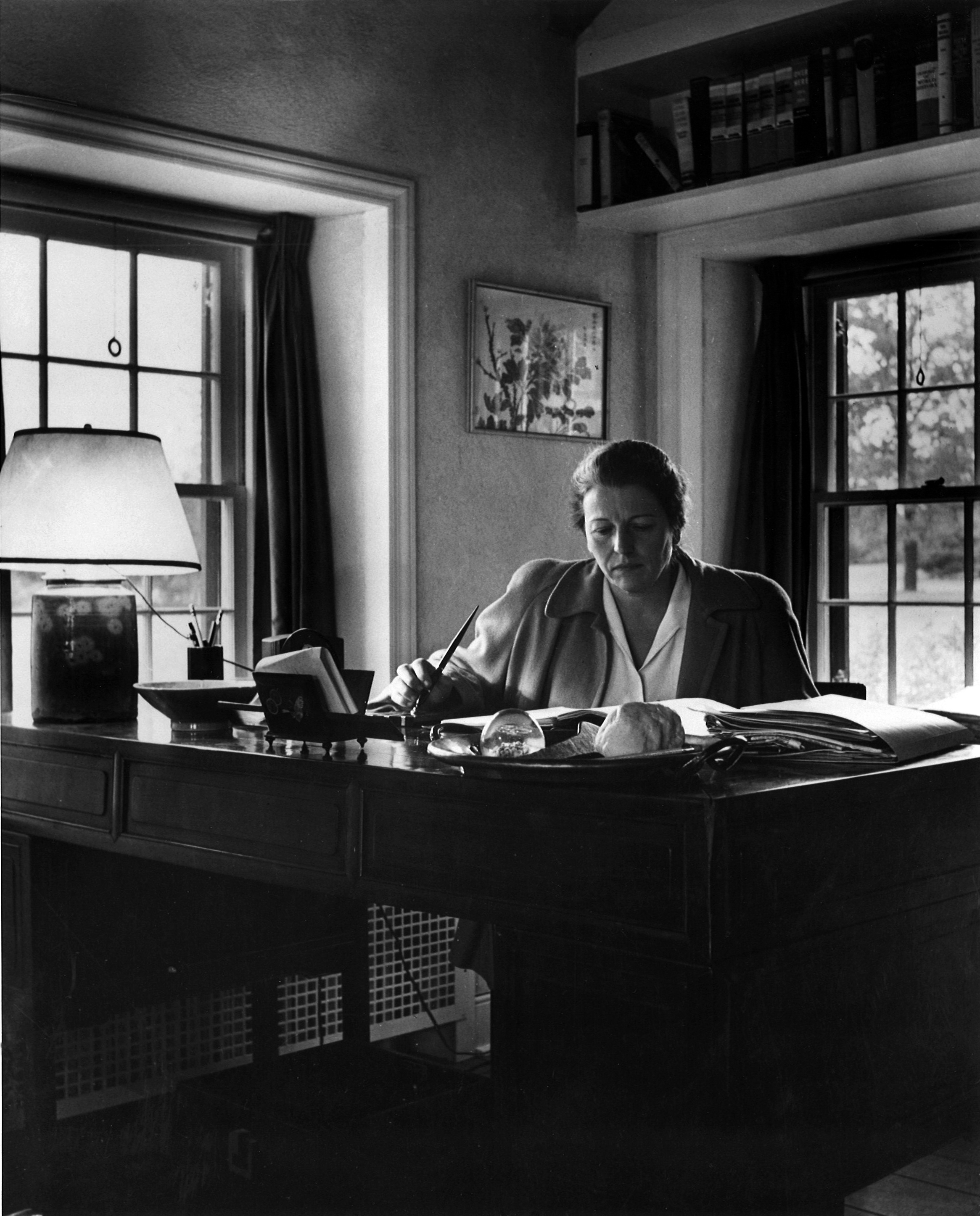 Pearl Comfort Sydenstricker was born June 26, 1892 in Hillsboro, West Virginia at the home of her mother’s family. Pearl’s parents had been Presbyterian missionaries in China since 1880 and were home on furlough when she was born. They returned to China five months after Pearl’s birth.

Pearl’s parents preferred to live among the Chinese and not in the missionary compound. Thus, she grew up in close intimacy with the Chinese people, speaking Chinese, playing with Chinese children, visiting their homes, listening to their ideas and absorbing their culture. These experiences helped to develop the mind and the imagination of an alert, intelligent child, who later used this material in her novels.

Pearl was home-schooled by her mother, who insisted that Pearl write something each week. At age six, her first published work appeared in the English-language Shanghai Mercury, a newspaper with a weekly children’s edition. Being an avid reader and having few books available, she started at the age of seven reading Oliver Twist. Each year she read through the family’s collection of Charles Dickens. She later said this influenced her style of writing. Mr. Kung, a Confucian scholar, tutored Pearl in Confucianism, Chinese history, and Chinese writing and reading. Although Pearl Buck lived in China, she also was exposed to American culture. Her mother observed all American holidays, and the meals were as American as her mother could provide.

In 1910, Pearl returned to the United States and enrolled in Randolph-Macon Woman’s College in Lynchburg, Virginia. She received a bachelor’s degree in Philosophy in 1914 and was invited to teach psychology at the college. After one semester, she returned to China to care for her ill mother. In 1917 she married John Lossing Buck, an American agricultural missionary. The couple spent their first five years in a small town in North China. Memories of peasant life in the region became the basis for her best-known work, The Good Earth.

On March 4, 1920, Pearl Buck gave birth to her only biological child, Carol. She was concerned that Carol was not developing normally, but received little or no support from her husband or doctors. At that time, nothing was known about the eventual diagnosis of PKU syndrome (phenylketonuria), which results in progressive mental deterioration if not treated immediately at birth. In 1929, Pearl enrolled Carol at the Vineland Training School in Vineland, New Jersey, where she lived until her death in 1992.

In 1950, Pearl Buck wrote The Child Who Never Grew about her personal feelings and experiences with Carol. The book helped many other parents of children with similar mental disabilities.

In 1925, the Buck family came to the United States to Cornell University, where Pearl Buck received her MA in English Literature. Before returning to China, the couple adopted an American baby girl and named her Janice.

Concerned about paying for Carol’s schooling, Pearl Buck wrote her first novel, East Wind, West Wind. It was rejected by many publishers, but Richard Walsh of the John Day Publishing Company published the book in 1930. Her next book, The Good Earth, was awarded the Pulitzer Prize in 1932 and remained on the bestseller list for 21 months. It was also developed into an Oscar Award-winning film in 1937.

Pearl Buck and her family returned to America in 1934 to escape the threatening atmosphere for foreigners in China, a result of the struggle between the Nationalists and the Communists. At the same time, she and Richard Walsh had developed a more personal relationship. Pearl divorced Lossing Buck and married Richard in 1935. She purchased Green Hills Farm in Bucks County, Pennsylvania, where she and Richard raised a large international family including their seven adopted children and several foster children.

In 1938, Pearl Buck was awarded the Nobel Prize in literature for her epic portrayal of Chinese peasant life and for the biographies of her parents. She was the first American woman to be awarded both the Pulitzer and Nobel Prizes for literature.

In addition to her many literary achievements, Pearl Buck was a driving force in humanitarian causes. She was a longtime advocate of cross-cultural understanding and racial harmony as a means of achieving world peace. As early as the 1930’s, she was a vocal supporter of the Civil Rights Movement in the United States. She fought prejudice wherever she found it. In 1949, moved by the plight of children fathered, and often abandoned, by American servicemen in Asia she founded the Welcome House adoption program. It was the first adoption agency specializing in the placement of biracial children, which continues today.* In 1964, the Pearl S. Buck Foundation was created as a child sponsorship organization to help children in their own countries with health, education and job training.

Pearl S. Buck died of lung cancer on March 6, 1973, shortly before her 81stbirthday. She is buried, as she requested, on the grounds of Green Hills Farm.

*Editor’s update, the Welcome House adoption program was phased out in 2014 because of changes in international adoption regulations

Biography and photo used with permission and approval from Pearl S. Buck International.