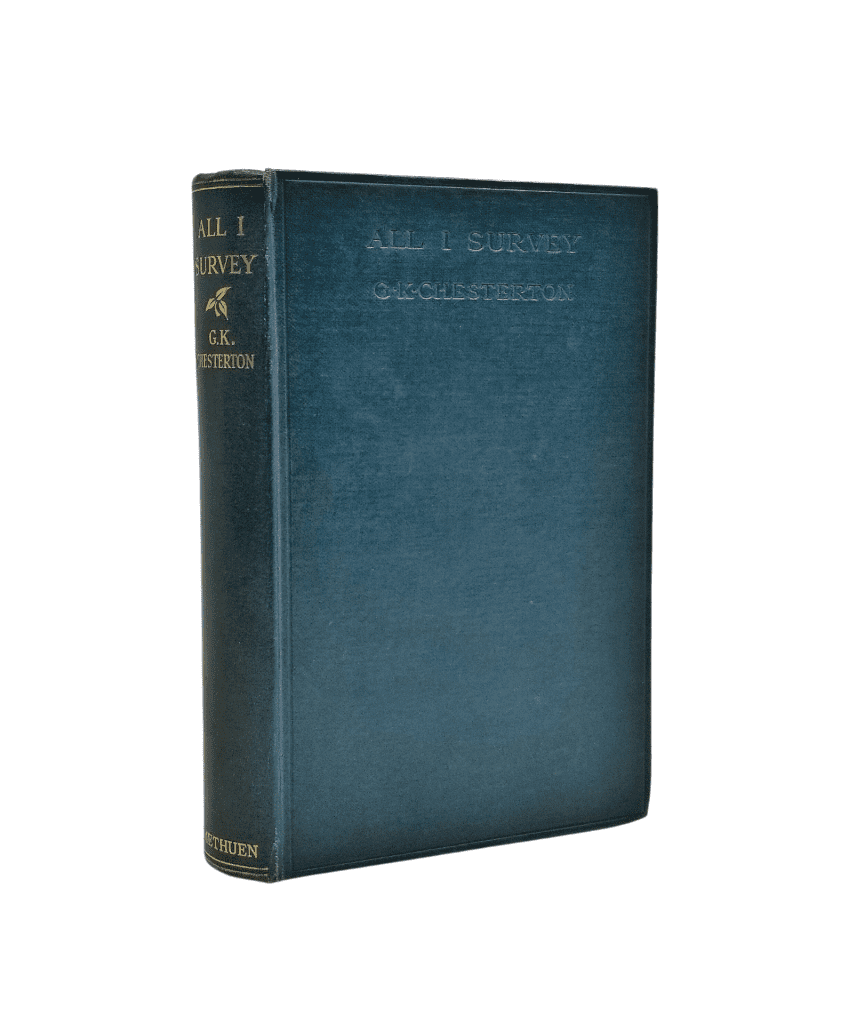 A collection of essays from Chesterton’s writing for the Illustrated London News. Many of the essays contain literary criticisms on authors such as Sir Walter Scott, James Joyce, Thomas Grey and more. The book also includes an entire essay by Chesterton about “bad” poetry. Other essay topics include journalism, industrialism, politics, education, religion and more.

I ON THE CHILD
II ON THE STANDARDIZATION OF STEVENSON
III ON TURNPIKES AND MEDIÆVALISM
IV ON MAMMOTH PORTRAITURE
V ON WAR MEMORIALS
VI ON OLD MEN WHO MAKE WARS
VII ON VACHEL LINDSAY
VIII ON THE STALENESS OF REVOLT
IX ON DEPENDENCE AND INDEPENDENCE
X ON THE TEUTONIC THEORY
XI ON PHASES OF ECCENTRICITY
XII ON BAD POETRY
XIII ON NEGATIVE MORALITY
XIV ON JONATHAN SWIFT
XV ON THE CREATIVE AND THE CRITICAL
XVI ON A NEW TAX
XVII ON SENSE AND SOUND
XVIII ON LITERARY CLIQUES
XIX ON THE SIMPLICITY OF ASIA
XX ON FATE AND A COMMUNIST
XXI ON ST. GEORGE REVIVIFIED
XXII ON JOURNALISTIC PHILOSOPHY
XXIII ON INDUSTRIALISM
XXIV ON MR. THOMAS GRAY
XXV ON EVOLUTIONARY EDUCATORS
XXVI ON THE CONTIGUOUS PAST
XXVII ON THE MERRY MONARCH
XXVIII ON SUICIDE: NORTH AND SOUTH
XXIX ON MODERN “PAGANISM”
XXX ON BREVITY AND WIT
XXXI ON EDUCATION
XXXII ON ROMANTICISM AND YOUTH
XXXIII ON MR. GEOFFREY CHAUCER
XXXIV ON MONSTERS
XXXV ON LOVE
XXXVI ON FICTIONAL CONVENTIONS
XXXVII ON SWEEPSTAKES AND GAMBLING
XXXVIII ON MAKING GOOD–I
XXXIX ON MAKING GOOD–II
XL ON EYEBROWS
XLI ON EATING AND SLEEPING
XLII ON SIR WALTER SCOTT
XLIII ON THE SOLAR SYSTEM
XLIV ON THOUGHTLESS REMARKS