As we prepare for the release of the paperback and eBook of University Sermons by Henry Sloane Coffin, we thought we’d share 25 of our favorite quotes from the book.

Henry Sloane Coffin was one of the most gifted pastoral speakers of the twentieth century. His intellectual eloquence and penetrating Biblical insights were a wellspring of inspiration for countless hearts and minds.

The quotes below come from various sermons given in the early 1900s to students at some of the most prestigious American academic institutions.

His words from those sermons not only capture his goal of lifting readers into a higher and larger life of Christian experience, they also offer a snapshot of one of America’s most celebrated preachers at the height of his communicative powers.

Henry Sloane Coffin (1877-1954) was a renowned American minister and educator. He pastored Madison Avenue Presbyterian Church in New York City and made it one of the most influential churches in America under his leadership. He was Moderator of the General Assembly of the Presbyterian Church in the U.S.A. and was President of Union Theological Seminary in the City of New York. He earned a B.A. and M.A. from Yale University, and B.D. from Union Theological Seminary. 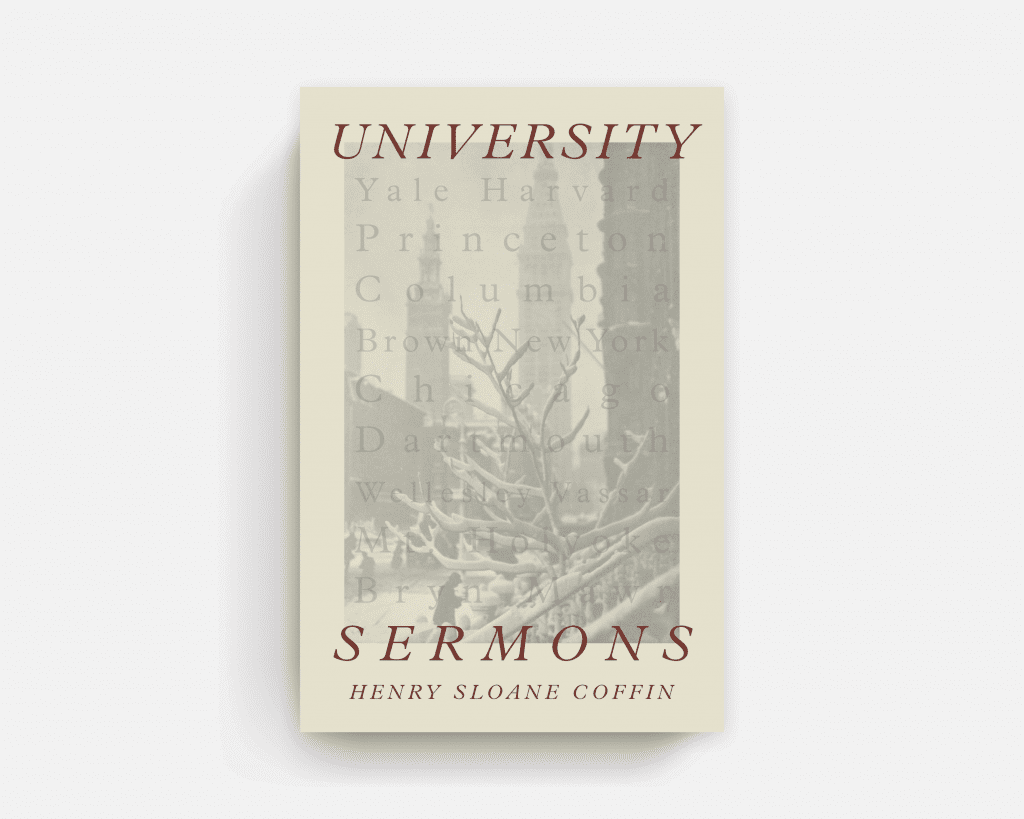 Above: The front cover of The Greater Heritage’s upcoming release of University Sermons. The title will be back in print for the first time in over 100 years.

“It is certainly important that believing people should use their brains, and the clearer the conception we form of the God to whom we are coming the closer will we get to Him, and the more intelligent will be our fellowship.” “It is not enough for us to have a feeling of trust in a Somebody altogether good, so that at times a mood steals over us in which we are uplifted and soothed and inspired; we have to connect that Somebody with the great universe, with human history, with all that is happening about us and with what goes on in our own hearts. And it is in thinking out, or in failing to think out, these connections that God becomes unreal to us.” “The unreality of God to many of us nominal Christians is due to our failure to appropriate that which we say we think we possess in Him.” “Real religion consists not in thinking about God but in dealing personally with Him.” “We spend a great deal of time in learning how to get, but never think of the need of learning how to have.”

“We need to remind ourselves that, unique as was Jesus’ relation to God, He was a loyal churchman.” “It is surely not likely that a modern Christian can maintain his spiritual life at its utmost vigor without constant contact with the Christian Church, which, however faulty, is certainly no faultier than the Church Jesus knew.”

“As parents, who on Christmas Eve have filled their children’s stockings, grow almost impatient if the child next morning spends too much time over the first thing he pulls out, and long to see him go further in and get at the better things they have stowed away in the toe, so one can fancy God eagerly waiting through the ages to see His children bring out one and another good gift He has aforeprepared for them.” “There are no locked closets in our Father’s house into which we are forbidden to go. Every door has a key; and we find the key as soon as we can profitably use the contents of the closets.”


“God’s self-concealment is not to keep away from us, but to teach us more surely to detect and find Him.” “Jesus, as we, walked by faith, and not by sight. There were times when God was hidden from Him; but He knew that the hiding was solely for purposes of discovery.” “And no man is justified in saying that he sees nothing in religion until he has familiarized himself with the God of Jesus.” “No one will give “a steady attention” to the search for God unless he is desperately eager to be sure of Him; and it has been the experience of many centuries that nobody ever sought God with his whole heart and failed to find Him. It requires a venture. Faith is a matter of daring.” “Oddity has always been an essential mark of Christianity. Salt, light, leaven, must be different from the mass they season, illuminate, transform. The man who has not the courage to be different, to break with his own past reputation, and the independence to take his own place in fidelity to Christ, irrespective of what anybody or everybody may think or say, need not listen to a message from Jesus of Nazareth. ‘Wherefore would ye hear it again? would ye also become His disciples?’”

Quotes about Sanctification and Christian Growth


“We may have been familiar with the story of Jesus all our days, but each time we look to Him, we are amazed to find something we had not known before. Each experience through which we pass, each need that drives us to Him, proves a key that opens up a new treasure-room and admits us to more of His unsearchable riches.” “Nobody turns to Christ from any experience, however extraordinary, and feels that there is no point of contact between himself and Him.” “Sudden transformations of character are, perhaps, the most startling and convincing of the manifestations of divine power.” “The living God! What a difference it makes whether He is alive to us or not, literally a world of difference, for we dwell in a totally different universe when He is alive in it with us.” “Do you feel yourself carrying your religion, or do you feel that it carries you: is it a weight or is it wings?” “A Christian’s beliefs are not ideas which he compels his mind to accept; they are convictions which grip him.” “The test of the reality of our contact with God through any form is the lift it gives us into higher and larger life.” “The upward pulling power of the Christian ideal is nothing else than the downward reach and lift of the living God in Christ, like whom we feel we simply must become.” “To possess a genuine contact with God is to be carried by Him so that fear and sorrow and problems and possessions and ourselves are not burdensome because His arms are beneath us and all.”