An Interview with Singer-songwriter John Fairfull of Five Minute Plan

I recently caught up with singer-songwriter John Fairfull to discuss his latest music project, an EP called On Starting Over which officially released today.

You can purchase a digital version of the album on Five Minute Plan’s website and John can be followed on his Facebook page.

He also recently posted a great lyric video to the song See You Again which we encourage you to check out! 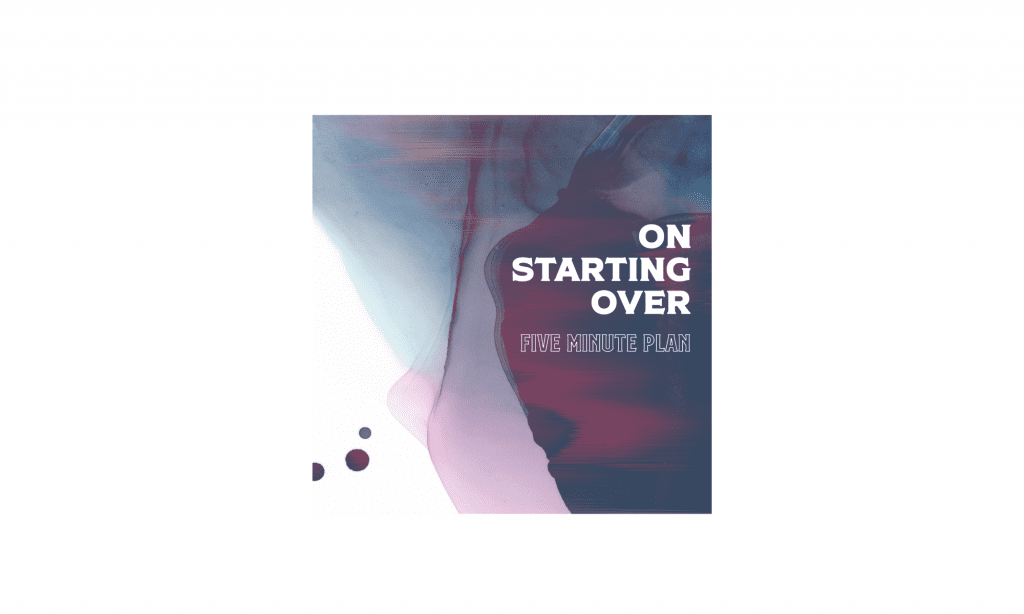 Five Minute Plan was an indie rock band from Central Florida that played locally there for over a decade. John served as the group’s lead singer and principal songwriter.

They produced three EPs and two full length albums. In addition to playing numerous concerts they made several appearances on radio, including WPRK 91.5 FM at Rollins College.

The band broke up in 2010, however John hasn’t missed the proverbial beat when it comes to music.

He is currently the Music and Media Director at Jordan Baptist Church in Sanford, Florida where he leads worship.

He has been involved in many other projects, one of them being the composing of the intro and outro music for The Greater Heritage podcast.

He’s also done lots of solo work so when we heard about On Starting Over, his latest project, we wanted to get the scoop.

Note: Comments below in bold are questions by J.R. and comments in italics are John’s responses.

What prompted you to start a new album?

Well, Shine On I wrote years ago but never mixed it. Recently, I’ve had more time to work on music again and to put something out there to connect with people. Music is a legacy for me and I like to get my thoughts out there. Its cathartic. The timing was right.

It’s a commentary on starting over, about how the world needs a reset which is essentially Christ’s return but in the interim the world tries to recreate itself all the time which adds up to the Tower of Babel“I’d like people to stop looking at external things to make their life better.”

The songs are a journey through politics, psychology, and different aspects of human culture trying to reach its way to God but ending up back where it began.

What do you want listeners to take away from it?

I’d like people to stop looking at external things to make their life better. A lot of people recently look to either public figures or social media to find meaning rather than focusing more on their inner thought life and religion for a higher meaning in life.

One word to describe the EP?

It’s a culmination of my thoughts on society and world progress over the past decade.

Tell me about each track.

See You Again is about when my father passed away. It contrasts that experience with a man that is very important in your life and Christ. It’s a contrast between your earthly and heavenly father and is about the idea that you will see each one of them again. Christ at His return and your loved one in heaven.

On Starting Over is about…a search for yourself, trying to find your identity and having difficulty doing that. It’s also about the difficulty of relating to others or having others relate to you. It talks about how society can lie to you. Ultimately it’s about how God has to find you for you to find yourself. “All art is God giving you a message for you to put out there in the world.”

Legacy is about politics. About how people look to a public figure to intervene in their life, and they look to strong leaders because they feel powerless because people are not self-actualized.

Shine On is about the re-creation of the tower of Babel. It’s about civilization and progress as a way towards creating the tower. It’s also about the Whore of Babylon in the form of world religion and how man is his own God, and how that is so empty. Lastly, it’s about being a Christian and seeing that and living in that and the difficulties in that.

In general, where does your inspiration for songwriting come from?

I’m inspired to write in general from the idea of creating something for posterity. I like to connect with people and give meaning with something that is very accessible. When I write a piece of music and I decide to turn that into a song it’s really an inspiration from God.

How is songwriting different from other forms of writing?

You’re writing for this separate thing, the music itself, you should write for that. When you develop as a songwriter you put words in the music that deal with emotions relating to the music and not entirely to yourself.

You’ve made some interesting statements about current trends in music, can you elaborate?

There needs to be more of an internet and indy renaissance for them to make a living on it and for them to re-take market share.

If there is less challenging of the status quo, art will suffer. In turn the lack of challenge creates a tableau where the ante is simply playing it safe.

Some would argue today that the stage is set for creativity to flourish because music operates in an anything goes world. What do you think about that?

Do you mean how music has pushed the boundaries of what’s acceptable to just appeal to the base instincts of man which is not art?

Well that’s a question of what’s morally acceptable, that’s a different discussion. It’s the artist’s job to challenge things and create a commentary on what is going on, that’s been pushed to the side and music is just recycling what’s already been said at this point.

How has your style changed since your last album?

I’ve gone more electronic, 90% of the EP was recorded digitally, and I’m doing everything myself. I’ve simplified musically. I’m more clear and concise.

What’s your philosophy on music?

It should be something that makes sense, that’s more concrete and less abstract. I like crafting lyrics and I like the lyrics to make sense. You can’t challenge the status quo with gibberish. I try to do something different with each new song.

So, you’re an innovator?

Any advice for aspiring musicians?

You have to follow the path no matter what anyone else says, you have to be thick skinned, you have to be very objective and take a lot of constructive criticism and be willing to improve. “Connecting with individuals, it’s a big part of why I do music.”

You also need to work well with other people, which is hard because most musicians start when they are young and don’t have those skills.

In the US things are aimed at younger people creating music. Having a business mind is essential but not everyone knows it and it’s something I’ve struggled with.

What are you most proud of from your musical career?

With the small reach I’ve had, I’ve been able to reach people in other countries. Connecting with individuals, it’s a big part of why I do music. Also, my lyrics and how I’ve improved over the years and always challenged myself to get better.

Has your message changed over time?

It’s always been about where I am in life, when I was younger it was about struggles, about growing up and friends and now it’s just more mature and well-developed. Its more cohesive and not so emotional.

It’s almost like when you’re really into it, you’re not even in control of it, it’s happening and you’re just harnessing it, it’s a flow, you get in the zone, and let it happen. It’s almost separate from you. You’re left feeling like ‘Did I do that?’ (laughs)

Last but not least, what’s the future hold?

I could see myself creating another all original, all electronica album or cover album in the next few years, or re-doing some of my older stuff in a newer style.

Podcast S2, Ep. 17 – Sin, Salvation, and Sanctification: A Blueprint for th...
What Is Open Theism as Opposed to Classical Theism?
Adventures in Acts: Peter's Theology of Jesus
Greatest Expectations